You would be joking…. 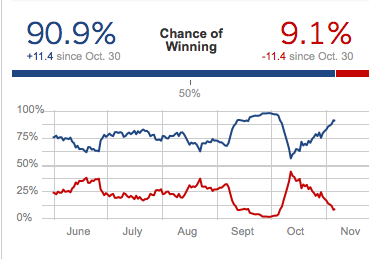 If Nate Silver at the New York Times FiveThirtyEight (the number of electoral college votes) blog is accurate, I won’t be unhappy.

What concerns me more is the effect that the first presidential debate had on voters – Obama drop from an 97% chance of winning to 60% after something that’s more like “America’s Superstar” than a serious political debate.

I watched the second debate from New Hampshire and was during my entire 8 day stay in the States bombarded day in, day out with political advertising that ranged from “economical with the truth” to downright lying.

And the press doesn’t rip them to bits?

This entry was posted in Bloody hell, Politics, This is America. Bookmark the permalink.

1 Response to You would be joking….