We had a lot of cricket books in our house.

A few novels – C.S. Forester (of whom Ernest Hemingway is quoted as saying, “I recommend Forester to everyone literate I know.”) and Nevil Shute – but mostly cricket books.

Most of them were biographical/autobiographical of players of the the immediate pre- and postwar periods and they were good enough reading.

But one always fascinated me.

It was the account of the epic England tour of Australia in 1954/55.

It’s a ball-by-ball, handwritten scorecard of the five test matches, with a rather jingoist text by Crawford White; understandable in the context of the era and the fact that England – having been comprehensively thrashed in the first match – came back to win the next 3 tests and clinch the series. 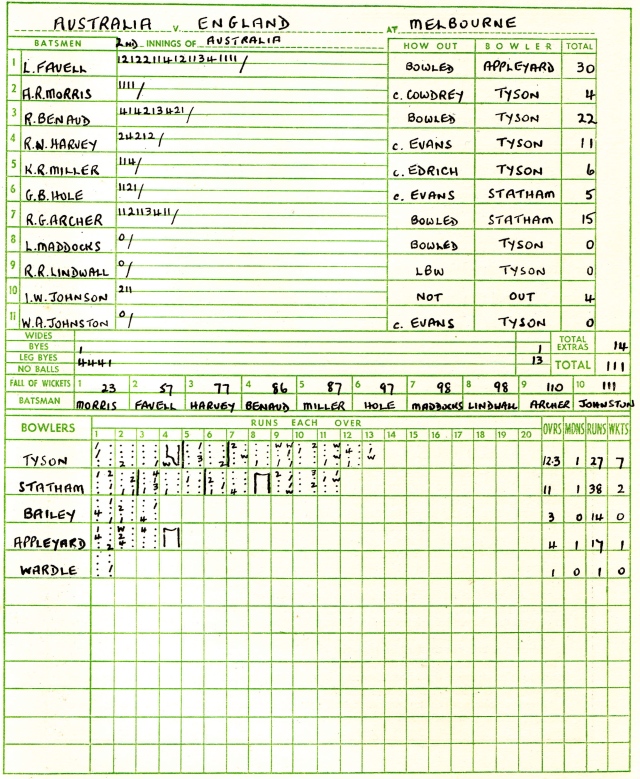 But Dad died, Mum remarried and sold the house and the books all disappeared.

So imagine my delight finding the book in a second hand bookshop a while back.

The moment I flipped the page open at the 3rd test, I was transported back to my childhood….

“From the happy position of being 75 for 2 at the start of the day, Australia were all out for 111 in exactly 79 minutes of unremitting violence.”

His diary of the tour – “Eye of the Typhoon“ – is an exceptionally erudite document that goes deep into the social and economic fabric of 1950s society of Australia and England.

Career didn’t last long – just look at the stress he’s putting on that right leg after his delivery – but at the time (and for years afterwards), he was the fastest bowler in the world.

(Oh,and the reception that his mother said in this interview that she was sure to would get on his return? Nothing. Not the right “class” of person in that era of Gentlemen and Players)

This entry was posted in Too good to miss and tagged Frank Tyson, Happiness is...... Bookmark the permalink.